Look no further for the best almond flour recipes with over 35 recipes for almond flour desserts, breads, pancakes, muffins, savory dinners, and snacks all in one place! Many are perfect for gluten free, paleo, low carb, and keto diets. Learn how to make almond flour at home, the benefits, nutrition, and tricks for making recipes a success!

Benefits of Cooking and Baking with Almond Flour

Almond flour has increasingly gained in popularity because of how it fits in specialized diets, such as gluten free, low carb, paleo, and keto. However, many of the benefits go beyond just health. It’s natural flavor makes baked goods and savory dishes taste rich and satisfying, and includes great nutritional value.

Almond flour is made from ground almonds, which means all the health benefits that apply to eating almonds also apply to almond flour. It’s also high in fat and low in carbs, making it a great Keto-friendly alternative to regular flour.

According to the USDA, it provides the following per 1/4 cup serving:

A blanched almond means the layer of skin enclosing the nut has been removed. Because blanched almond flour is ground almonds without their skin, it will have a consistent cream color (free of red-brown flecks of skin), as well as a smooth texture.

It is also more finely ground, lighter, and particularly good for making pastries and other delicate baked goods. Removing the skin does not impact the nutritional benefit. Whether the flour is blanched or unblanched, the benefits remain the same.

For the most part, almond meal can be used interchangeably with almond flour. Almond meal is made of unblanched almonds, or almonds with their skins on.

It is less finely ground than blanched flour. This gives it a more coarse texture, which makes it great for gluten free bread crumbs and crust for proteins such as pork, chicken or fish.

Unblanched almond flour means the almond skin has been left on. The red-brown flecks in the flour can affect the appearance of some dishes. This is beneficial for some dishes, giving it a more rustic look.

Cookies, cakes, brownies, and more – can all be made with almond flour. Since almond flour is naturally gluten free, this is especially good news for people who suffer from celiac or have gluten sensitivities.

For more gluten free dessert recipes, be sure to check out 80+ Best Gluten Free Desserts or Easy Flourless Cookies recipes!

By using almond flour in your muffins, bread and pancakes – your breakfast can be nutritious and just as tasty as it ever has been.

Almond flour can be used in many savory dishes, as well as sweets. Consider using it in lunch, dinner, snacks, and savory dish recipes to decrease carbs and create dishes that are naturally gluten and grain free.

Can I Make Almond Flour At Home?

Yes. Making almond flour, or almond meal, at home is both simple and cost effective. With little equipment, and some almonds, you will have your own almond flour to use in no time.

How to Make Almond Flour or Meal:

How to Blanch Almonds

If you would like to blanch your own almonds bring a small pan of water to boil. Toss in raw, unsalted almonds and boil for 60 seconds. Drain the almonds and rinse with cold water to cool them off. Lastly, squeeze each almond to remove the skin.

What Can I Make with Almond Meal?

How to Store Almond Flour

Almond flour is best stored in a cool, dark place for up to one year. If you use it frequently, store in an airtight jar or container in the refrigerator.

It may also be stored in the freezer, but allow it to come to room temperature before using for baked goods.

Because of the weight of the flours, a one-to-one conversion isn’t always possible. In addition to weighing less than regular flour, almond flour also contains more moisture, which changes the chemistry of baked goods.

It’s tempting to replace regular flour with almond flour in recipes because of its many benefits – like being grain and gluten free, as well as low carb. If you’d like to experiment on your own, keep some of the following tips in mind:

Items used to make this recipe*: 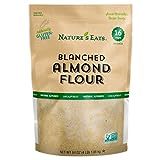 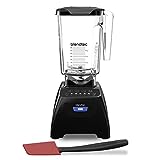