Baked Chocolate Orange Oat Pudding is a rich, warm, and chocolate baked pudding dish with a touch of orange flavor and creamy texture from steel cut oats. Serve this chocolate oatmeal pudding for dessert with ice cream or breakfast with milk.

Last night we held the equivalent of the UN General Assemby at our house. Due to our house addition, we had to clear out the babies’ room to make way for walls being knocked down today. We had to quickly figure out how our family of six, living in a three bedroom house, will now temporarily coexist in a downsized two bedroom house. There was a lot of jockeying for territory and unreasonable demands being solicited.

Nolan immediately went into Putin mode. Upon hearing our proposal to have his little brother, Finn, share his full bed with him, Nolan went from incredulous hysterics to absolute tyranny. Under no circumstances was he going to share a bed with Finn because “he sucks his fingers and it would keep him up all night.” Plus, Nolan didn’t know for sure, but he had a strong suspicion that Finn was the culprit for ripping his beloved Minecraft poster over his bed. There was no feasible way Nolan could overlook these atrocities and move forward to an amicable shared bed co-existence.

Clara was Germany. When we suggested Finn sleep on her top bunk and she share a bed with Nolan, she obviously wasn’t thrilled about someone taking over her territory. Ultimately she agreed (probably because she knew Russia wasn’t going to fold) in order to take one for the team and help out for the greater good. She ceremoniously gathered up all of her bedside treasures and moved down to the lower bunk with Nolan.

Finn represented Switzerland. He was physically there, but not really weighing in. During all the talking, crying, and pleading about his location, we were simultaneously clearing out his room and disassembling his bed. He never said anything at all. Finally, about an hour after his normal bed time, he quietly asked if he was going to have a place to sleep.

Elliot is currently the State of Palestine. There has been a lot of discussion about where he will ultimately reside, but we still haven’t hammered out the details yet. Currently he is napping in a pack and play in our room, will probably sleep in the playroom tonight, but there has also been talk of him taking up residence in the hallway alcove as well. For the time being he will be playing musical rooms until we have definitively declared a homeland for him.

Throughout the assembly, Ryan and I played the United States. We had an authoritative presence, but had to feign like we were heeding demands and negotiating. Actually we were just finessing the situation for it to play out exactly as we had previously determined it would.

After all this went down I was in desperate need of dessert. I needed something chocolatey, warm, and didn’t require a trip to the store. Baked Chocolate Orange Oat Pudding was born. I ate mine with ice cream and whipped cream (I earned it), but this would also make a great breakfast or brunch recipe. Top with milk, yogurt, or fresh fruit, and you’ll have one heavenly breakfast!

SAVE THIS BAKED CHOCOLATE ORANGE OAT PUDDING TO YOUR PINTEREST BOARD! 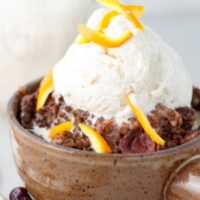 ❉DID YOU MAKE THIS RECIPE? DON'T FORGET TO GIVE IT A STAR RATING AND COMMENT BELOW!❉

5 Easy Tips
for baking like a gluten free pro!